This is what inequality looks like by Teo You Yenn 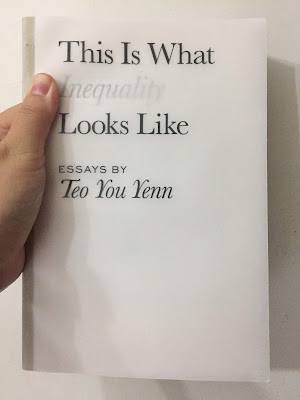 This book is a game-changer.

Professor Teo You Yenn, head of the Department of Sociology at the Nanyang Technological University has just published a book about the underprivileged in Singapore. This book features material from 3 years of ethnographic research on families living in rental flats in this country.

Even though the author is an academic, this book is written for the layman in an easy-to-read manner that allows one to go through the book without any great difficulty.

We are eased into the topic with an introduction that lays bare the reality of the poor in Singapore. This chapter is named “Step 1: Disrupt the Narrative” and with good reason. We have all been sold the well-known narrative of a country that went from Third World to First in a matter of decades and how we were once poor and now rich. But what about those who have not shared in the country’s success story?

We are told why this matters and what is at stake here.

The book is arranged as a series of essays that can be read in any order, but they have been arranged to be read as a totality and in sequence. I did that and would highly encourage all to do so.

Different ones will find different chapters resonating with them.

For me, it was the chapter on education.

I’m not surprised when she revealed that Singapore’s education system, hailed as one of the best in the world, most likely perpetuates inequality instead of allowing the poor to level up. This is because in an age where every child is sent for multiple tuition and enrichment lessons, the poorest of us who are unable to afford these classes lose out.

The chapter on race that the author was “strong-armed” by her editors to write too proved to be a good lesson in sociological terminology.

After reading this book, I became more acutely aware of the my own privilege and will make an effort to support the poor and needy in the little that I am able to.

I’d highly encourage everyone, Singaporean and non-Singaporeans, to grab a copy of this book to uncover the hidden realities of those living in poverty in a first-world country like ours. Click here to buy a copy today!
Posted by Rachel at 10:36 AM No comments:

Undivided: Coming Out, Becoming Whole, and Living Free from Shame by Vicky Beeching 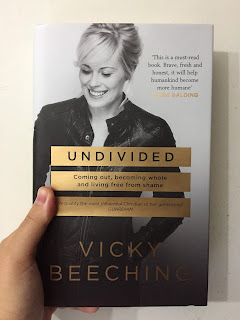 Vicky Beeching used to have a successful career as a Christian musician whose songs were played in churches all across the world. When she came out as gay, she lost not only many of her friends, but also her music career.

Why would she do this?

All the years of hiding in the closet took a toll on her. At around the age of 30, she developed an auto-immune disease that forced her to undergo chemotherapy treatment and to confront the truth about her orientation. Her doctor shared with her that most of his patients had an unresolved trauma that provides ongoing stress that would trigger the onset of this disease.

This was the impetus that led her to come out publicly in 2014.

This book tells her story.

It is heart-breaking at times as she recounts how many times her heart got broken as she had crushes after crushes on her straight female friends who then went on to marry or date other guys.

However, there are light-hearted moments, especially the one where she shares about her experience meeting a prominent music executive on page 114 of the book. I couldn't stop smiling at that anecdote where her British accent got her entangled in a major embarrassing moment.

I loved her recounting her days at Oxford and her theological meditations on issues such as slavery and women's equality that were big topics of debate in the church in both the past and present respectively.

It was also interesting to read about her music career touring church after church across the United States. (It's not as glamorous as you may think.)

Her orientation, which she kept secret, caused lots of issues and pain for the men around her who tried to date her but were inexplicable rejected time and again.

She tried confession to get rid of her gay feelings, and even underwent an exorcism to boot. Nothing helped.

Once, at the end of her rope, she even contemplated suicide, something many LGBTQ+ Christians can identify with.

Fortunately, she made it through those dark times, and in an interview, shared that after coming out, she has been her most liberated self, truly understanding what freedom is like.

This is a most lovely book, probably a little triggering for gay Christians to read, but nonetheless very educational for the average parent, pastor, or church leader who may have closeted members in their congregation. This book will help them understand the very real difficulties they face, and hopefully, bring about some change in currently toxic and largely negative attitudes many of them have (at least in Singapore) regarding the LGBTQ+ community.

I'd encourage everyone to pick up a copy of this book today!

If you'd like to watch a video review I made of this book, here it is:

Disclaimer: Rachel’s Now Reading is a participant in the Amazon Services LLC Associates Program, an affiliate advertising program designed to provide a means for sites to earn advertising fees by advertising and linking to amazon.com.
Posted by Rachel at 12:12 PM No comments: