All But Invisible: Exploring Identity Questions at the Intersection of Faith, Gender, & Sexuality by Nate Collins 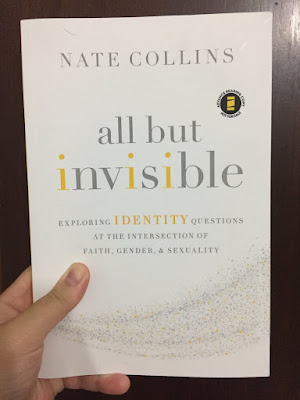 This book is a breath of fresh air amongst the growing collection of books dealing with the topic of being gay and Christian.

The first part is further subdivided into three sections, firstly to convince readers that conservative churches and nonstraight people need to be reconciled to each other, secondly, contextualising it, and finally, possible vocations for nonstraight people in the church.

It was the last part that I found most interesting. Apart from celibacy, he offers two other alternatives, mixed orientation marriage (where one half of a male/female couple is straight, but the other isn't), and celibate partnerships. The latter two have only been hinted at from what I've seen online in the LGBT-Christian conversations, so it was nice to see it fully fleshed out with practicalities brought into consideration.

The second part of the book deals with the modern concept of sexual orientation. The author discusses what "desire" means and how it plays out in a person's life. Next, he touches on passion, its moral side effects and differentiates passion from admiration, temptation, and lust. Then he elaborates on the implications of friendship.

The next chapter was a short history on how the term "orientation" came about and its significance. This is followed by a chapter that delved into quite a bit of detail on intimacy, its various forms, and how it impacts gay people.

Then came a discussion on what gayness is and isn't, which I thought might prove particularly helpful to conservative Christians who might not be in possession of a single gay friend.

Finally, the last part of the book deals with identity. The author talks about biblical personhood and gender and then brings his attention to the broad field of feminism and the various approaches to contemporary gender theory. It might seem strange and unrelated, but he skillfully ties it up in the final section on the modern gay experience. He also elaborates on its minority status. He finishes by looking at how gay identities have interfaced with Christianity and how Scripture informs conversation about how one's various identities might relate to one's spiritual identity.

I feel that this is a very useful tool for pastors and leaders in the church who want to understand more about gay issues and how it interfaces with Scripture. This is the book for them. Written clearly and concisely, it is a great way to start a conversation and I'll certainly be getting my senior pastor this book for Christmas.

Although a little long, I must say that it is no fault of the author's as he has covered a lot of ground in three hundred plus pages. He even apologises repeatedly in various sections how certain parts were "brief overviews" but points us to several relevant books and articles in the footnotes. I have benefitted from his extensive footnotes and research and must say that this has been one interesting read.


Disclaimer: I was given an Advance Reading Copy by the publisher in exchange for an honest review.

Rachel’s Now Reading is a participant in the Amazon Services LLC Associates Program, an affiliate advertising program designed to provide a means for sites to earn advertising fees by advertising and linking to amazon.com.
Posted by Rachel at 8:47 PM No comments: 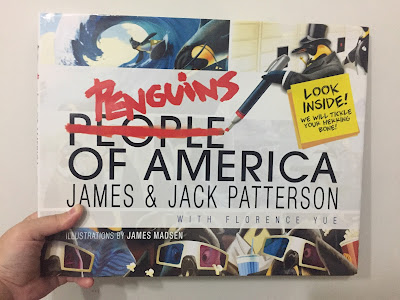 This charming book is filled with page after page of full-colour illustrations of penguins doing things people usually do - singing, commuting to work, watching a 3D movie, having dinner at a restaurant, queuing for coffee in the morning, and more!

Each page is accompanied by a single, most humorous sentence that serves as a caption for every drawing. I'm impressed by the wit and the generous use of puns in the writing. Although pithy, they do their work well.

When I showed this book to a friend of mine, she commented that "it was very nice" but was disappointed that there was a lack of a coherent storyline to join the various images together. I, on the other hand, like the fact that it was organised this way. I quite enjoyed the complete randomness of the book.

Do take note that this is not for children but would make a clever gift for a birthday.

Disclaimer: This book was sent to me by Pansing in exchange for an honest review.

Rachel’s Now Reading is a participant in the Amazon Services LLC Associates Program, an affiliate advertising program designed to provide a means for sites to earn advertising fees by advertising and linking to amazon.com.
Posted by Rachel at 12:53 AM No comments: