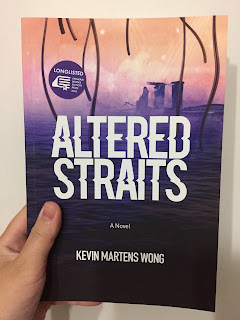 Altered Straits is one of the best sci-fi books I've ever read. And I've read a couple. Although not everything out there, fiction is just not my cuppa tea these days. In any case, I just had to buy this book with my latest paycheck after reading a teaser that the publisher put out that got me hooked.

Set in Singapore, the story has 2 main characters, Titus, who is a soldier in the year 2047, and Naufal, a merlionsman, also a type of soldier, set in 1947.

In the future, Singapore and most of the world have been destroyed at the feet of the mighty Concordance. Titus is part of the resistance, fighting to keep the country alive. He has a secret that he keeps hidden from his family and colleagues though - a lover named Akash. Somewhat unsurprisingly, being gay, or having a gay relationship seems to be illegal in the country even in the somewhat dystopian future. I really liked the character development of Titus throughout the book.

Naufal is the younger brother whose elder brother, Nabhan, enlisted to be a merlionsman before him. In battle, his merlion died, and because of pair-bonding (in which the human and creature have their minds are blended together) Nabhan was never the same again. He can barely feed himself and when he speaks, it's incomprehensible. Naufal fears that the same would happen to him and nearly ran away the night before the day of his enlistment.

The novel tracks the journey of both characters, each called to defend Singapore from a foreign enemy using the best of their abilities.

At the end of the novel, using a time-travelling device, their paths eventually meet and the ending was bittersweet.

The story kept me at the edge of my seat and because it alternated smoothly between Titus and Naufal, it didn't get boring at all. The people and scenes felt very realistic too even though it was set in both an imagined past and future.

I must say the merlions were an interesting touch. What the author proposed certainly sounds feasible to me in the next 50-100 years. Would actually be kinda interesting to see a real merlion he described in the future.

This is the first book I've read about sci-fi set in Singapore. It's brilliantly done and I must say credit probably goes to both the author and his editors. Keep up the good work Epigram!


Disclaimer: Rachel’s Now Reading is a participant in the Amazon Services LLC Associates Program, an affiliate advertising program designed to provide a means for sites to earn advertising fees by advertising and linking to amazon.com.
Posted by Rachel at 12:55 AM No comments:

This book of poems is one of the best haiku books I've read. Not that I've read many, maybe about 3? Hahaha. Anyways let's get started with the review.

Gwee has been posting haikus on his Facebook page for some time now and this collection features many of them.

It's arranged chronologically and the astute Singaporean that's been keeping up with current affairs for the past couple of years would probably recognise what he refers to in the pithy poems.

Covering almost every major incident in the sunny island from the haze, to Amos Yee, to the Art of Charlie Chan Hock Chye, to the Little India riots, to elections to Joseph Schooling and more, this is a short history of the past half decade of Singapore.

I would recommend reading it twice. The first time I read, I simply looked at the haikus and smiled with delight on how he managed to compress each event into 17 syllables.

The second time I read, I referred to the titles of the haikus that only appear at the end of the book to figure out exactly what he was referring to. There were some that were rather foreign to me you see.

I think this would make an excellent gift to anyone and is a small and light book that's easy to put in your bag or briefcase to read on the train.

It's a book that can be read again and again. I am reading it for the third time now and it's still as entertaining.

I guess one of the drawback is that the poems might feel a bit dated after a while. I already felt it in one or two of the earlier pieces. I guess only time will tell if these poems will age as well as fine wine does.

Although the price tag is somewhat steep ($19.90 at Kinokuniya), the book contains 120 poems. So for the Singaporean who wants things to be value for money, it's $0.166 per poem. And if you read it twice, it's $0.083 per poem. Very worth it right? Hahahaha, so go get your copy today! Trust me, you won't regret it.

Posted by Rachel at 6:32 PM No comments:

The Year of the Flood by Margaret Atwood 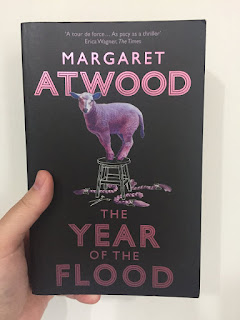 Before there was Suzanne Collins and The Hunger Games, there was Margaret Atwood, the original writer of our dystopian future.

This was a book donated to me by a friend who was a missionary abroad. And it had been sitting on my shelf for the past 2 years before I decided to read it on a whim a couple days back when my other non-fiction titles got a little boring.

What an amazing book it is!

I forgot how good Margaret Atwood can be. It's been a long time since I picked up one of her titles (I vaguely remember The Handmaid's Tale as a somewhat disturbing novel.)

Anyways, this book is about a time when The Waterless Flood (aka a pandemic not unlike SARS) took over the world. The Gardeners, a kinda Christian-environmentalist cult, had predicted it for years and were living their lives in preparation for that.

The novel centers around 2 main characters who take turns narrating, an older woman, Toby, and a younger girl, Ren. It traces their paths of how they came out of their vanilla lives and entered the realm of The Gardeners.

It was really interesting to read the hymns Atwood penned. Reminds me of the ones I sing in church. You can even listen to various renditions on YouTube!

All in all, it was an excellent book, it was so uncanny how even though the book is almost a decade old, it still seems rather relevant. I can imagine a future quite like the one she describes.

Disclaimer: Rachel’s Now Reading is a participant in the Amazon Services LLC Associates Program, an affiliate advertising program designed to provide a means for sites to earn advertising fees by advertising and linking to amazon.com.
Posted by Rachel at 5:43 PM No comments: