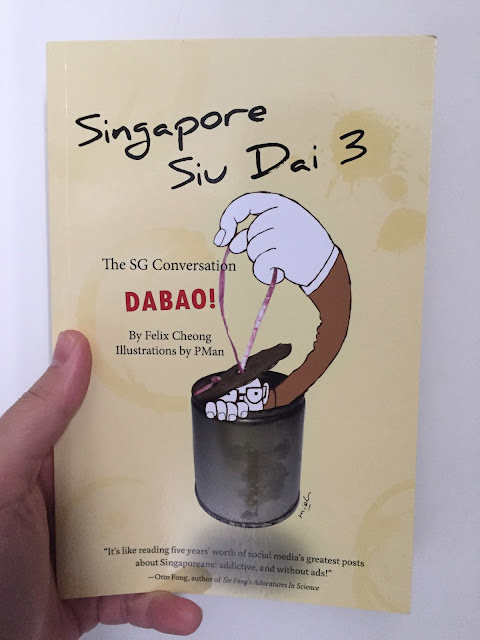 This third installment of the Singapore Siu Dai series is possibly be the best one of the three.

I had a friend hankering to read it after showing her a couple of pages. And this is from someone who doesn't do much reading, that was how good it is.

In this new book, Felix pokes fun at current affairs in Singapore, and as usual, nothing and no one is spared. We read about the flaws in the education system, family planning, the civil service and elections among others. I read with a bit of discomfort (as a former member) on the two pieces lambasting City Harvest Church, but I guess everything's fair game.

On a different note, the illustrations by PMan are absolutely spot on. They were really hilarious! I think The Straits Times or Today should consider giving him a daily spot to entertain their Singaporean audience.

My all-time favourite piece was Seeing Stars and when I showed it to my sister and her good friend, they both chuckled in amusement.

Here is the excerpt and you can decide if you'd like to get a copy (you really should).

It had finally happened.

After weeks of near misses, months of nagging by her Ma, sometimes tripping over her own toes and once almost sideswiped by a car or cat (she couldn't tell, since she wasn't paying attention), Siok Ah Choo finally fell through a manhole while walk-walk-watching K-drama on her mobile phone.

Like taxes and death, it had to happen, sooner or later. Luckily, she was dressed in her best and most comfortable pyjamas.

Down there, it smelled of shit, though the hole wasn't too deep. Siok Ah Choo didn't seem to mind. The slush came up to her ankles - she could wash it off later, if she had the time. But right now, all she cared about was that she would not be disturbed.

Ears plugged, eyes glued, she continued watching episode forty-five of Kill Me, Heal Me on her phone. No need to go to school tomorrow, no need to study for the test next week, no need to listen to Ma's nagging.

All the time in the world, inside this black hole, to be with her constellation of Korean stars. Quietly, she disappeared into K-heaven.

When they found Siok Ah Choo's body months later, maggots had long had their meal of it. There was little left for the family to pick up and cremate, except her skeleton and a turf of hair.

But what the police found strange was that her phone was still clasped in her hands and her earphones plugged into the sockets where her ears used to be. The phone battery was still at 90 percent strong.

Stranger still was the fact that the entire run of Kill Me, Heal Me was still playing in an endless loop.

If you liked this, do get your copy from Ethos Books by clicking here today!