Myth of the Stone by Gwee Li Sui 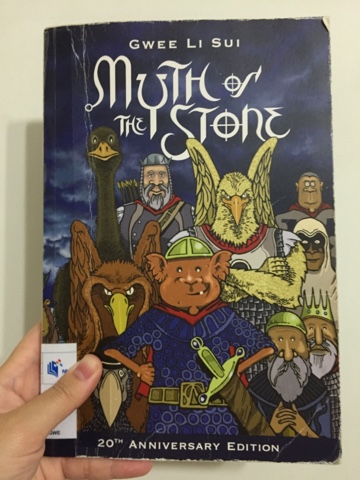 I'd heard about Gwee Li Sui for some time now but first met him at a book launch a couple of weeks back. He was a nice guy and not only autographed my books but even drew a little sketch of me. Haha, so I naturally picked up this graphic novel at the library when I chanced upon it while browsing through the "Singapore" section as I always do.

I must say it's not a bad attempt for a debut graphic novel. It was first published more than 20 years ago and is now resurrected in this lovely edition. I'm glad Epigram Books took up this project. It's part of #SingLit after all and we should all partake of that delicious treat.

The book's basically about a boy, Li Hsu, who ventures into a fantastical world where he must find out how to turn himself back into a human after being transformed into an imp when he unwittingly sets a curse on himself.

We follow him on his quest as he encounters weird and wonderful creatures of every sort. I liked the friendly Merlions the best. Yep you read it right, Merlions. Singapore's national icon made a passing appearance in the book.

I thought it was kinda like reading C. S. Lewis' Narnia in graphic novel form, especially at the climax of the story where a sacrifice takes place and resurrection occurs. Pretty cool stuff.

It is unfortunately an extremely wordy graphic novel compared to others I've read. Now I must qualify that I've not read that many books of that genre and this is my third one after Sonny Liew's The Art of Charlie Chan Hock Chye and one that was adapted from Jane Austen's Pride and Prejudice, so I can't make a fair judgement. Words filled a large fraction of every page and that kinda distracted me from the comics quite a bit. But the lovely rhymes scattered throughout the book redeemed it a little. I quite enjoyed those.

It was an interesting break from the usual diet of non-fiction books in long form that I usually read although it was slightly long-winded. I think the editing could have been a wee bit tighter. But I think there probably wasn't an editor. No matter, what's done is done.

I look forward to any graphic novel Gwee might produce in the future and I would encourage him to use computer software or a ruler because reading slanting words are very tiring on the eyes. This is coming from someone who writes sentences in a downward sloping manner if the paper is unlined.

Well, if you're a kiasu Singaporean, this would make a novel gift for your friend or family member this Christmas! Get it from Kinokuniya or Books Actually today. :) 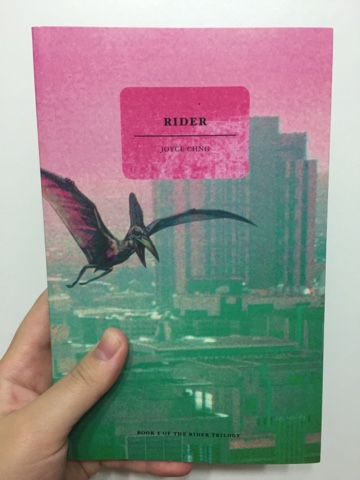 Rider belongs to the genre of YA Sci Fi or Young Adult Science Fiction, something that is largely unheard of in Singapore. Or at least to me. If you’ve read other good Singaporean Sci Fi, do drop a note down in the comments below cos I’d love to check it out.

On that note, the author had huge shoes to fill because the only Sci Fi I’d read was Isaac Asimov and he was brilliant.

Well, I was surprised that the first book in the trilogy felt more like an Asian/Singaporean take on The Hunger Games or Divergent as it is set in a somewhat dystopian world. It’s basically about a girl, Lixi, and her adventures as a Rider. A Rider is, you guessed it, someone who rides a creature not unlike a pterosaur, or a dinosaur bird. I don’t know if that’s what Chng had in mind, but it was the image that came to mind as I read the book.

Now where was I? Ah yes, Lixi has got green fingers and helps her mom in the garden and is envious of her sister who became a Rider. One day, she got a chance to come up close and personal with one of these birds, albeit a wild one, and developed a close bond with it. A series of events unfold where she later becomes a Rider in her own right.

I thought that the story was rather interesting and moved along at a rather brisk pace which was great. Featuring local cuisine in the future world was a good move as it helped localise the setting a little.

What was missing was a good editor. There were loose ends that were not tied up and I was somewhat confused as I proceeded further and further into the story. For example, we are not told clearly if Lixi had indeed developed feelings for Sarah or not. At first she seemed to reject her advances, but later when confronted with a persistent Daniel who kissed her, she appeared to consider Sarah’s feelings. That was a little puzzling to say the least.

In any case, it’s not a bad attempt for a first time author and I look forward to the second and third books in this trilogy and hope that a conscientious editor combs the manuscripts with a fine-tooth comb.

Well, if you like The Hunger Games or Divergent, or if your kids liked it, you might want to consider getting this book at Books Actually. It’s a bit slower paced and rather interesting too.

Disclaimer: The author sent me a copy of his book in exchange for an honest review.
Posted by Rachel at 1:25 PM No comments: 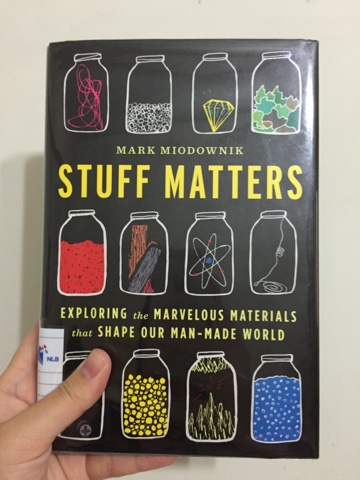 If Bill Gates recommends a book, I'd definitely read it. So when he tweeted about it recently, I knew I just had to get ahold of it.

Now do note that I have a degree in Materials Science and Engineering which makes me a bigger nerd than most on all things made of materials - which is, everything, actually.

This book is BRILLIANT! If only it'd been written when I was in school, it would have motivated me to study hard in class and attempt to appreciate the esoteric nature of the modules I was taking. Mark Miodownik is a great writer and he makes every chapter supremely interesting.

We learn about how concrete works in buildings to how chocolate works. You'd probably not consider chocolate a "material" but he does, and he devotes a chapter to it. (If only my professors did that... Well, I can only whine.)

He moves on to glass and how it is formed from sand and describes how different it is and then goes on to wax lyrical on ceramic and how it is made.

Traditional materials like metal and paper aren't left out and we are regaled with tales of how they are used in the modern and ancient world.

It isn't every day that you get an interesting and captivating science book written by a professor and when you do, treasure it, because you never know when the next one is gonna come by.
Posted by Rachel at 8:38 PM No comments: 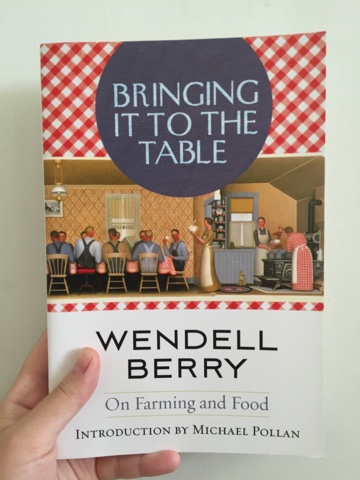 I've heard about Wendell Berry from my American friends on Twitter for some time now. But it was only a couple of months ago that I decided to order this book, and I certainly did not regret it.
What prompted me to buy it was a secret desire of mine to create a farm in urban Singapore (impossible as it may sound) and I wanted to read about how to do it in a sustainable manner that also contained a Christian element to it.
In this book, Berry elaborates on how modern agribusiness has destroyed the productivity of the land and of the small scale farmer with its excessive use of machines, fertilisers and monocultures to achieve economies of scale. He advocates farming by the individual instead and explains how it has proven to be very successful (the Amish are one example he quotes), who cultivate the land as opposed to exploiting it. Only in this way can the land be used for decades and lift the individual out of poverty as instead of keeping him in it, which is what the modern agribusiness seem to be doing.
My sister commented that if I'd a farm, that I had to go to university again to get a degree in agriculture. Berry advises that the farmer himself possesses knowledge that professors do not have by virtue of the fact that the former has intimate knowledge of the land that he works on day after day. I should go be an apprentice of his instead.
A prophet who had already predicted in the '80s how America would find itself with a food crisis on its hands, he continues to exhort the masses on how they can play a part in the farming. City dwellers can choose to eat responsibility, choosing fresh produce from sustainable sources and purchasing from farmer's markets instead of supporting the monopolies that produce processed food. (I have been inspired and shall attempt to incorporate this in my life as an urbanite.)
I particularly enjoyed the last section where he included some passages from works of fiction that he had previously written, together with some essays on the pleasures of eating. To read about how people truly enjoy eating is joy indeed.
I would recommend this book to those interested in being a more responsible consumer to read this book to understand how modern agribusiness is harmful to not only the environment, but also to the farmer and the consumers too. It is a delightful read of essays that are intelligent and well-written.
Can't wait to purchase my next Wendell Berry book!
Posted by Rachel at 1:19 PM No comments: