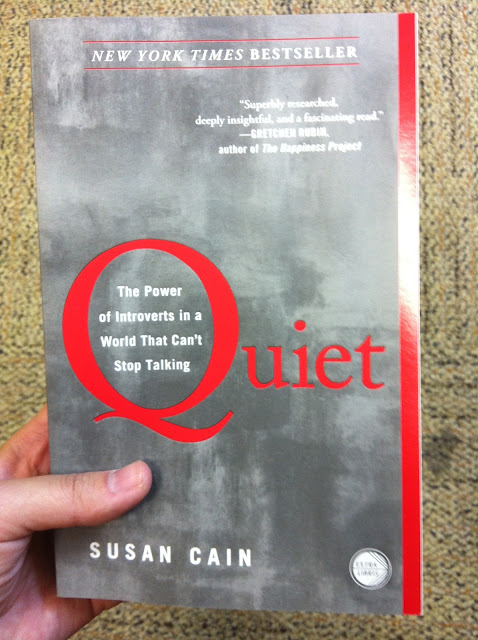 I received this book near the end of last month as a farewell gift from my colleagues. It was something I requested for and they actually got it for me. I was extremely touched.

I'd first learnt about this book on the social media platform for books - GoodReads. My friend from university had posted this book as one of his "To Reads" and the title was pretty intriguing. When I discovered that it was on the bestsellers list at Popular bookstore I knew that I had to read it.

Why? Because I've always considered myself as an introvert even though nobody believes it. My colleagues and friends would label me as someone outgoing and friendly. After reading the book I realized I am probably a pseudo-extrovert. More on that later.

The author took a grand total of approximately 7 years to write this book and really did plenty of research to prove her point that introverts have many strengths that are often overlooked by a world that prizes the charismatic personality. The detailed research is evidenced by the dozen of pages worth of appendices or notes at the end of the book.

She tells us that anywhere from one-third to half of the entire population are introverts. That is a whole lot of people if you ask me. And she opens with an interesting story of Laura, an introverted lawyer sent to fight a tough case against one that had opponents her complete opposite. She was a nervous wreck but reminded herself that she had strengths others probably didn't. So she kept her cool and ask probing questions and maintained her stance and eventually managed to reach an agreeable solution. Then she reveals that the introverted lawyer was in fact, the author herself.

The book is an easy read and covers much ground. The author interviewed neuroscientists to find out how the brains of introverts differ from those of extroverts and also gleaned insight from psychologist that could predict which personality a baby would turn out to be.

In addition, she points out that introverts are able to develop an extroverted personality, also known as pseudo-extroversion, on topics that they are passionate about. This is because the love of the subject would help them overcome their shyness and reticence.

That is how an introverted girl like her who'd a fear of public speaking became a Wall Street corporate lawyer who quite her job to set up a consultancy and have a TED talk that has been watched by over 4 million people. Not bad for someone who couldn't sleep the entire night the day before a conference.

She even teaches us how parents with the opposite temperament from their child would benefit from having a parenting style that suits the personality of their child and how to raise up confident introverts.

It's an awesome book and I bet you'll enjoy it like thousands of people have.

Posted by Rachel at 8:31 AM No comments: