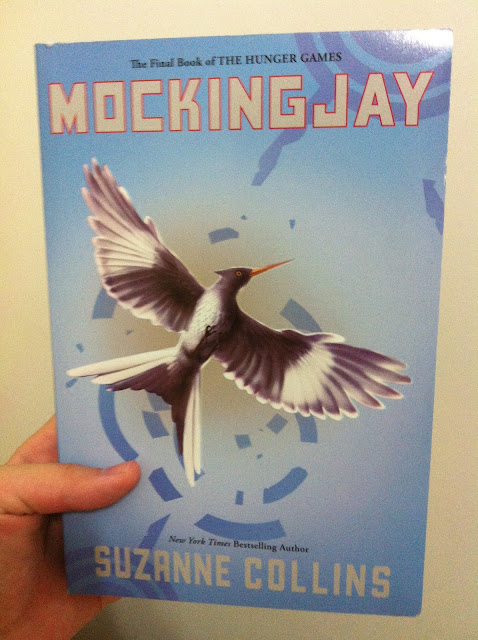 I have been meaning to blog this for a while after realizing I had neglected to write about the final part of the marvelous trilogy. So on this night, plagued with some mild insomnia, I have found some time to share it with you, whoever my silent, faithful readers might be.

In this 3rd book, our protagonist Katniss Everdeen has been captured by the rebels as District 13 mounts a rebellion against the Capitol. They had been planning it from the start of the Games in the 2nd book.

In this book, she is torn between the love of the two loves of her life. This love story captivates as the typical love triangle involves two girls and a guy whereas this is between two guys and a girl. Awesome! Peeta, her faithful partner throughout the Games was unable to escape together with Katniss and has been at the mercy of the Capitol as they attempt to get answers out of him via torture.

Nonetheless, he remains loyal to Katniss and even gives her a premature warning before a massive Capitol strikes occurs, allowing them to save the lives of the people of the entire District.

Katniss feels trapped in this last book as she feels less like a Mockingjay, a symbol of the rebellion, and more like a tool being manipulated by her captors. Yet if she does nothing, people will suffer. So she is presented with this very real dilemma, to fake it, or to do nothing.

Eventually she takes up the role of the Mockingjay. But she does it in a way no one quite expected and it fits her to a T. The middle part of the book chronicles her adventures and is action packed. I love it! Sadly, many characters you'd have grown to love in the 2nd book die as the author kills them off one by one in the various battles. But like a chess grandmaster would say, sometimes you need to sacrifice in order to progress.

There was a twist at right the end of the story as to who the ultimate victor and I'll keep it a secret. But I must say I love happy endings! 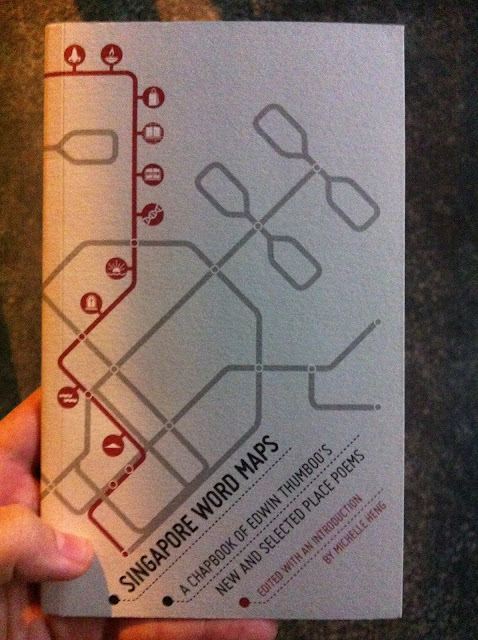 What on earth is a "chapbook" you may ask? Well, I didn't know either until my faithful Merriem-Webster iPhone app informed me that it was "a small book containing ballads, poems, tales, or tracts". There you go.

I received this book as a reward for speaking up during the interval of the ending debate of the Singapore Writers Festival that took place on 11 November 2012.

The book is essentially Thumboo's insights and reflections of various parts of Singapore, ranging from Kent Ridge to Punggol to Bidadari. I love the idea of place poems. What better way to remember your country and the places that bring meaning to you, both old and new, than such poems?

So I dove into it straight away. I must admit that free verse is not my usual cup of tea. But who could resist a free book? And I have heard so much about the author, I had to finish his book. So finish I did.

I suppose good poetry makes you want to read it repeatedly. And Thumboo's poems really warrant re-reading. I most certainly will. The poems are rich with meaning, full imagery and local flavor. I must say that if one has not lived in Singapore for a protracted period of time, one might not appreciate these poems fully.

Well, I don't know where to get a copy of this book if you'd like to purchase a copy after reading this review. I did a quick search on Google to no avail. But it's published by the National Library Board of Singapore so you could ask them if you're interested.

Out of a far country by Christopher Yuan and Angela Yuan 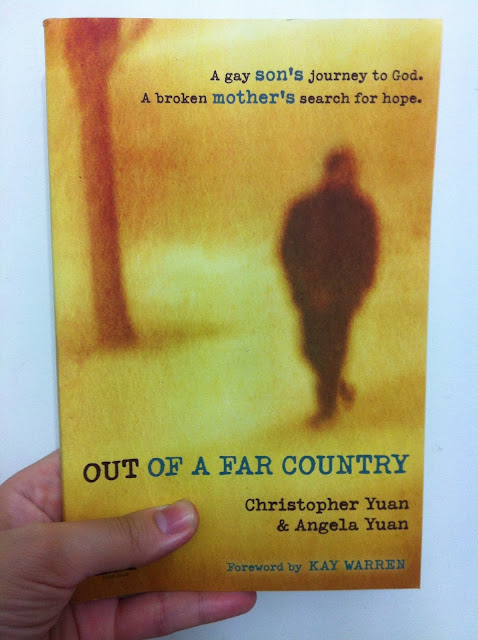 I just finished this book on the way home on the train and the ending brought tears to my eyes. Now it's pretty rare for a book to do that; I don't weep much while reading, what with it being a rather cerebral and abstract activity.

I first heard about Christopher Yuan earlier this year as he was a scheduled speaker in the Exodus International conference. Then a few weeks ago, I started following him on Twitter. He posted a couple of reviews that I read and that piqued my interest. So I ordered my own copy from bookdepository.com.

The book is an easy read and is an alternating narrative featuring both Christopher and his mother Angela Yuan. I must say the reviews do not do justice to the book.

This book tells us in great detail about a relatively promiscuous gay life that Christopher led. He came out pretty early in the book to his parents and moved out immediately after doing so. He was in dental school, but the nights in the gay clubs introduced him to the world of drugs.

First experimenting, then dealing in small amounts, finally graduating to being a successful dealer in great quantities of drugs nationwide, I must say that he was a really intelligent businessman. I was really impressed at the scale of his dealership. Then again, that's probably how he got into dental school.

On the other hand, Angela was a person that was very much against Christians and the church. But after the shock of her son coming out to her, she decided to end her life and was miraculously prevented by a talk with a minister who gave her a booklet titled, "Homosexuality: An Open Door?", she began tentatively believing in the possibility of a God. That was the turning point.

I shall not go into too much detail for fear of spoiling your read, but this is truly a story of the power of prayer and perseverance. Despite Christopher's aggressive stance and behaviour, his parents never once gave up hope in his redemption.

And one day he is finally busted, caught red-handed and imprisoned. Picking up a Bible from a trashcan, Christopher begins his journey to God. He eventually led Bible studies and preached in prison, surprising both himself and his mother.

This is one amazing story and the final homecoming was so simple but full of meaning that I teared up in the train and was trying to hide it, fearing that my fellow commuters might not make sense of it.

So, if you're interested in hearing the inside scoop of the gay lifestyle in America, it does go in quite a bit of detail, describing the party circuit and stuff, get this book. There were times I felt like a voyeur. But more than that, if you want to know how to respond lovingly to a person coming out, this book gives you an incredible example to follow.

This is one truly compelling book. Enjoy!
Posted by Rachel at 10:24 PM No comments: